In the middle of August we went to a family celebration in Bristol.  It finished about five so we drove to have a look round the center of the city but could not find anywhere to park!  Driving back to the hotel we spotted a sign to Sea Mills.  Intrigued we parked by what looked like a boring patch of grass and got out to stretch our legs.  What a surprise it proved to be!  As we climbed up a wonderful view through an old stone bridge appeared; you can see this in the featured image above and below.

What we were looking at is the river Trym just before it joins the Avon and where once a commercial dock was, an area now used only for leisure craft, according to the web site though not sure where the craft are!

Looking the other way the river looks as a river should:

until it hits the concrete weir which must stop the tidal waters surging up stream.  It amused us to see a flock of female ducks and one seagull seeming to be watching for the tidal waters. 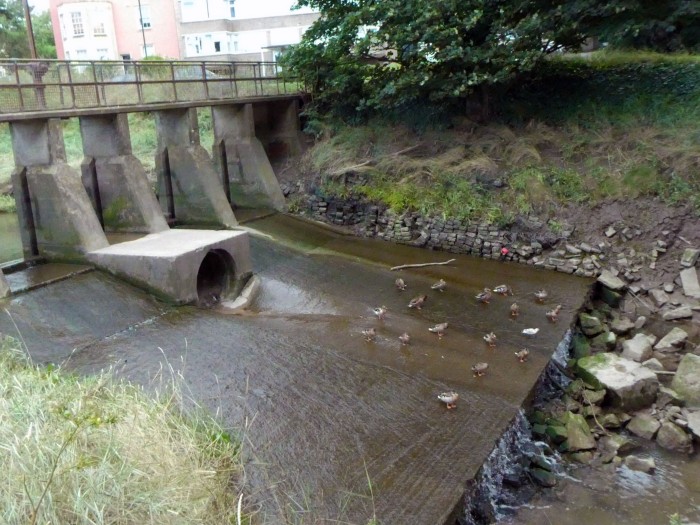 Of course a poem started scratching in my head.  The boat I mention, Mignonette, had a center plate which meant it only drew 18″ (45 cm) and could thus sail up river without grounding, an ideal vessel for estuary sailing. I found an advertisement for one almost the same!  It gave me quite a jolt to view the images.  Though once the pin holding the center plate sheared in Pin Mill and my father and uncle had to dig a deep pit under it so as to replace the broken part.  It had to be done between tides; it was an exciting rush to which I was just an observer. Wild Rose, a Whitstable oyster yawl, was my favourite of my father’s boats.  He sold it to William Golding and the photo shows the author sitting on the tiller that I once grasped as I stood on the after deck in front of the mizzen mast.

There is a song, a favourite of my father’s
“Mud, mud, glorious mud
nothing quite like it to cool the blood”
I thought of it as I looked at shining, sculpted mud
lining the river Trym, a tributary of the Avon.
The sun reflected as clearly as from a mirror,
a seagull, its white untouched, swooping for scraps.
The Nile must have been like this after the inundation.

There was that time 60 years ago I watched a naked girl
slide down the slick-black bank of the Blackwater.
I remember her shrieks and shouts as the mud coated her
and her two nude, silent, male companions.
My father and uncle had left me in the cockpit of the Mignonette
anchored in the middle of the river and rowed to the yacht club.
Sound in a river at night is so clear; it was as if I were with them.
The mud and their bodies joined with the night air as it darkened,
and they disappeared leaving me listening to the the hiss of the Tilley lamp.

To my surprise, Tilley lamps are still available.  Ours was a storm lamp and I loved its brightness after the glow of a hurricane lamp.

Before we went to Bristol we stayed with some old friends in Bideford.  I love to look at the old bridge with its arches of different sizes

and think of the merchants who financed it arch by arch.  The bigger the arch the richer the merchant.  This time it was the clouds that caught my attention and the reflected sun in the windows of houses in the delightfully named East the Water. 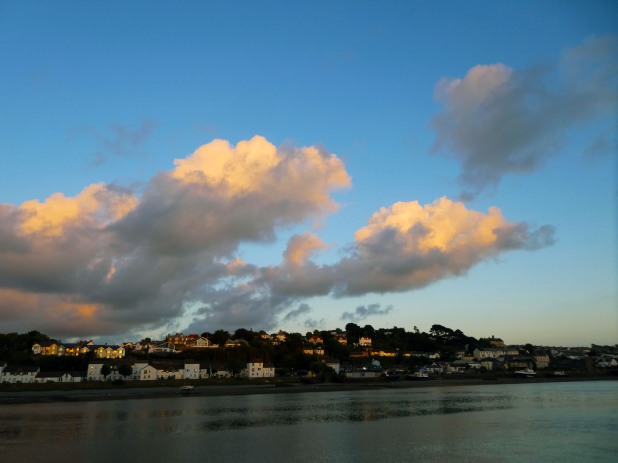 And there were the scullers. 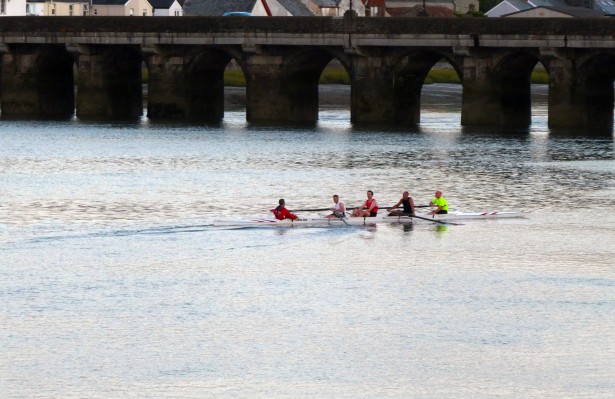