Rootling amongst my more ancient  picture files I came across some I still like.  The first two were taken at the annual  World Music Festival in St Maixent l’Ecole where children from all over come to perform their national music and dance.  Valerie and I have been to about three.  One of the most exciting groups was one from Siberia, shamanic dancing, it was thrilling; but no photographs.  It would be great to have such a festival in Enfield.  As well as formal concerts in the evening, the groups move around the town stopping every now and then to dance and sing.  Two images inspired me to a short poem which I incorporated into the image.

I fire, stamp and sound ricochets through and around.

I burn, flame through the whirls of my skirt,

devour music and song, live in my dance

Who are you looking at who!

I danced in St Maixent as drums and bells sounded.

You snatched my image, made me see you.

Who are you looking, who?

Here are some more mainly from Asia. 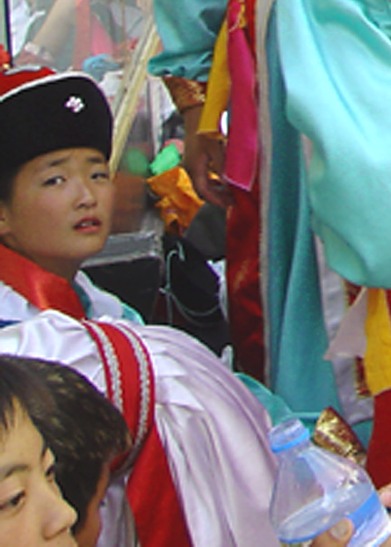 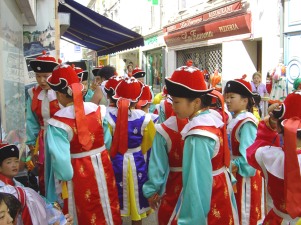 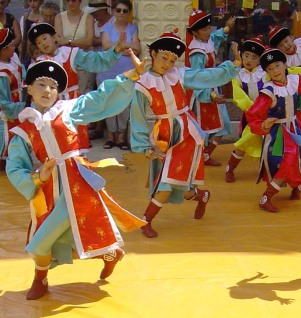 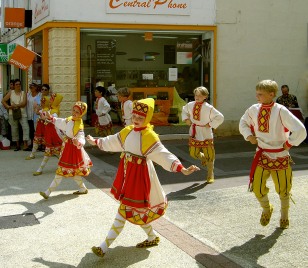 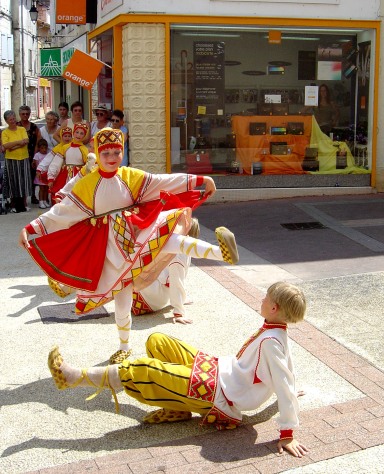 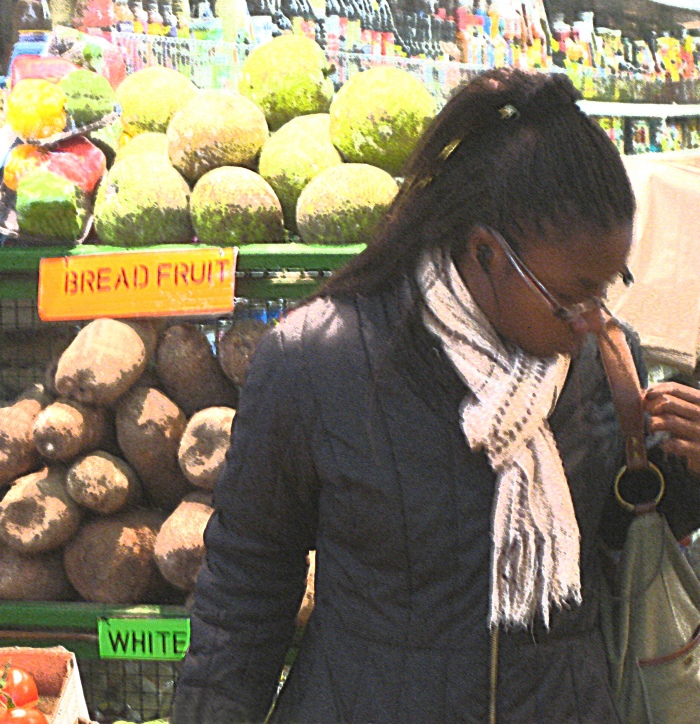 The Abbey in St Savin was begun in the mid-11th century and contains many beautiful 11th- and 12th-century murals which are still in a remarkable state of preservation. It has been a UNESCO World Heritage Site since 1983.  Valerie and I visited there last August and the inside of the Church is so beautiful. 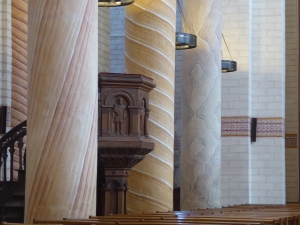 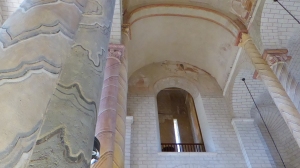 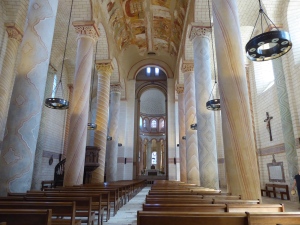 The designs are clear and clean, dramatic and it is wonderful to think that they have been there  for 900 years.  It was serene and peaceful which is not always the case.  Church architecture and design can be so beautiful expressing how creative and loving we can be and it is extraordinary that such wonder was created by artists, artisans and craftsmen whose names I will never know. 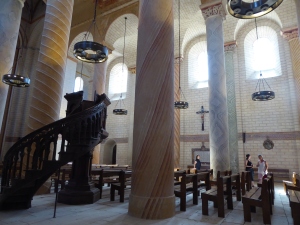 We went on to Montmorillon famous for macaroons – there is a museum – the clay montmorillonite and bookshops; rather like Hay-on-Wye I suppose. 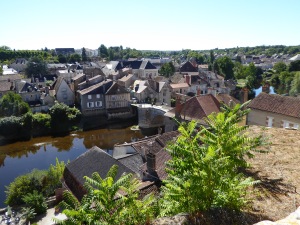 Some shops where built into the cliff so an internal wall was stone undressed by man.

So back to Epron where we were very pleased to find the large carp have returned. 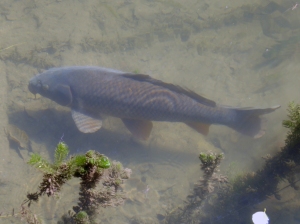 Not the ones we used to watch these were probably fished out of the leat but new ones claiming their territory. 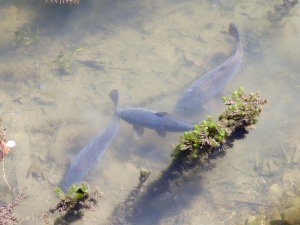 Valerie and I like to take a walk in Hadley Wood Christmas Morning.  It is a lovely old Beech Wood and near one of the suspected sites for Arthur’s Camelot, or at least that is one theory for Camlet Lake.  The area we stayed in had a great number of Holly trees and bushes and we found a great pile of prunings complete with berries.

The wood is quite well managed with piles of branches and trunks left for insects and wildlife to hunt and live in and fungus to grow.

It was surprisingly quiet and felt as if it were our own wood.  On the way back to the car I found a log with stripes of fungus and an optimistic holly seedling.

A couple of days later,  we walked up Bush Hill and along the secret path to the Town.  On the way we chatted to a man who was staring up into an Oak tree.  There was a Nuthatch feeding on insects clinging to the bark even when upside down.

You can just see it right of centre in the photograph on the right.  I had never knowingly seen one before, it was a special moment for us.

We came across the same man as we crossed the little iron bridge over the New River Loop.  “A Pochard” he shouted as we approached him, “and a Spoonbill duck.”

I’d seen the little red-brown headed Pochard duck many times over the years thinking it was an ornamental addition by the Council.  Not so, its a migrating duck.  The spoon bill was swimming in a tight circle.  “Typical behaviour” he said.

There was once an old branch jutting out over the river where I saw a Heron perching on it eyeing the fish.  It was only about 5 meters away from the path.

There is a long steep and narrow path down to the bridge and I spotted Enfield in the distance through the thicket.

It looked like a secret and magical town.  The river East of the bridge was frozen, to the West it was golden Water.

As we strolled along the bank I could see what was Bovril house, now flats, across the park

and further on where the river runs under Church Street a group of tiny rose blossoms.

Finally a picture of the Town looking East with Bovril House in the distance.  Just on the left is Berndes fresh fish shop, one of the two or three that were in existence in the same position when I came to Enfield in 1947 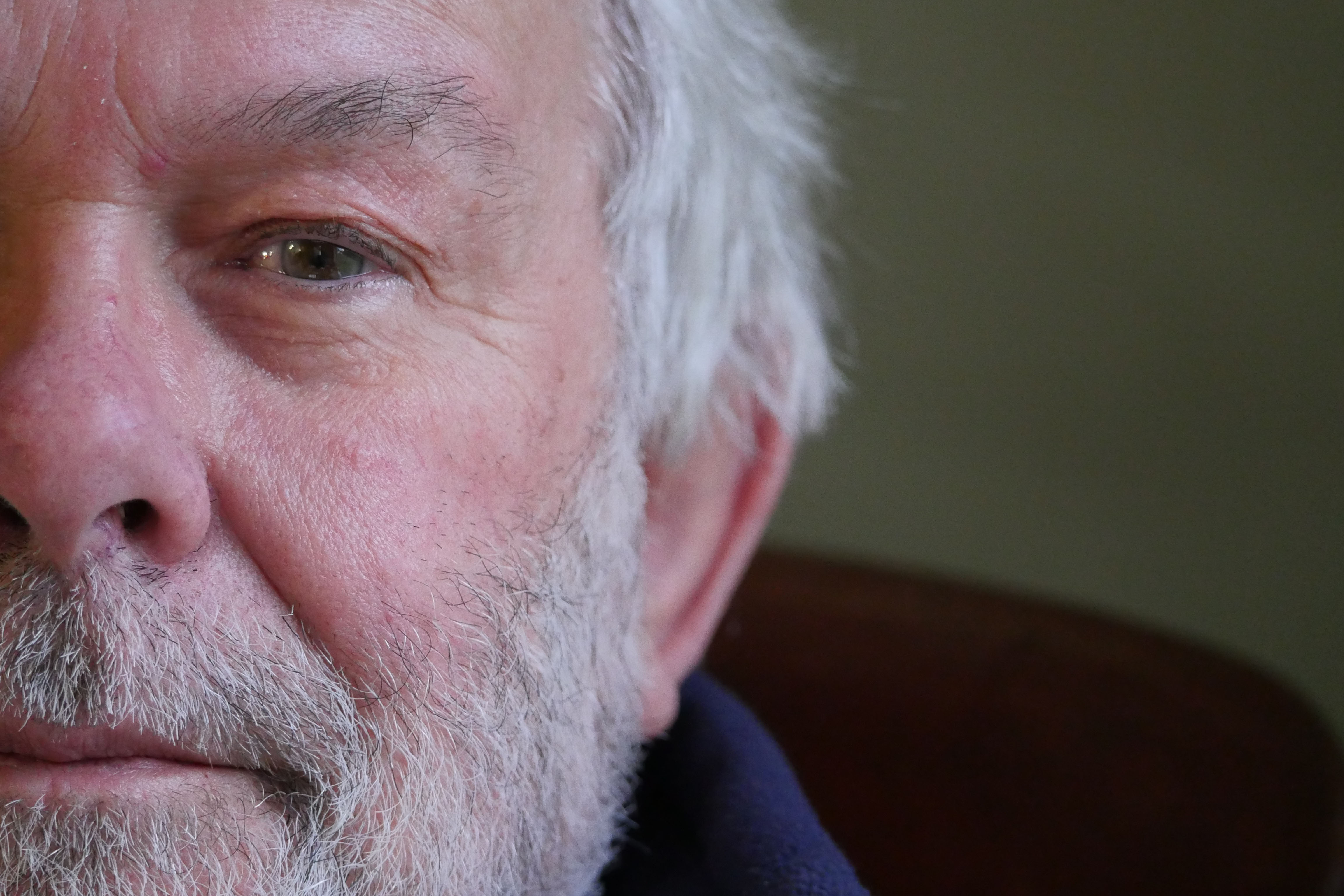