The Local History Unit at the Dugdale Centre has just sent me this interesting picture of how the original Station house must have looked.  It was demolished on 1872 and as photography became accessible about 1860 so it would have been taken sometime in this decade.  Looking at the broken glass and boarded windows  I suspect it was taken just before demolition.  I was intrigued to note that only part of the façade is in the V&A, the centre part on the first floor.  The man who built it to show off his bricks would be saddened to see it in this state.  Shame it was long before John Betjeman’s time!

The railway came to Enfield in 1849 and the station was opened on March 1st by Eastern Counties Railways as Enfield. It was renamed Enfield Town on 1 April 1886. The original station  was a house built in the late 17th Station and was the birthplace of Issac D’Israeli (he later moved to Baker Street Enfield) father of Benjamin Disraeli. This fine house, built by a rich man who made bricks, was to become a school at which the great poet John Keats was educated. It was demolished in 1872 and the fine 17th-century brickwork facade,  attributed to Christopher Wren, was dismantled, and reconstructed at the Victoria and Albert Museum though it is now hidden behind a false wall and cannot be seen.

The current station was built in 1957.

Nearby is a gold post box celebrating the Gold Medal won by Charlotte Dujardin in the London Olympic Games 2012 . 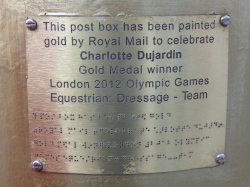 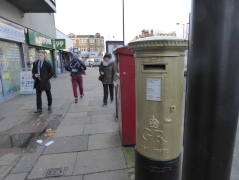 As well as taking the middle class to work in the City, the original line ran in to Bishopsgate Station,  it was an affordable journey for many working class.  Houses for both the rich and artisans built of London Brick, proliferated.  Enfield had many brickfields so the building material was readily available.