We recently rented a cottage for along weekend with old friends.  Valerie and Becky have known each other for nearly 70 years!   It was in Watermouth Cove, Devon  and, although the cottage was a bit seedy, it was a lovely place to be.

We missed seeing the cove at full tide, we were often out and the 13 hour cycle was out of sync with us.

The top end was an untidy jumble of a boat yard, they  always seem to be like this like this.  One evening I watched a huge mobile crane creep from the hard across the beach to the work shop where it lifted a shiny engine destined, I suppose, for one of the yachts being worked on.

I sat on a bench and chatted with someone who told me that there are pockets of Cornish-like language in Devon.  We were both interested in languages and dialects.  He was Cornish but now lived nearby.

Looking out to sea I realized that, as the sea is an electrolyte and with layers due to temperature, pressure and concentration variations it is in the way of a neural network that connects us with all continents and islands and boats  bring people to and from our land, eels travel from the Sargasso sea to our rivers.  It should nurture, help us understand others and enable development.

The bay and my thoughts inspired a Haiku.

This cove will soon run with them;

she waits with her  own.”

The second day we went to spend the day in Ilfracombe .  We parked above the town which was great as we were able to see the statue “Verity” by Damian Hurst who lives nearby.

It was quite a dramatic sight and I was pleased to see it from a distance.   Public art, especially statuary can be dramatic like this and always gives a lift to the ambiance of where ever it is.

On the walk down to the town we passed a tumble of fishing nets and lobster or crab pots.  It  smelt strongly of fish and the sea.  The air in our town is sterile the same as in all towns and cities but in the country and by the sea it has character, dung in a field, animals, old fish and the sea. 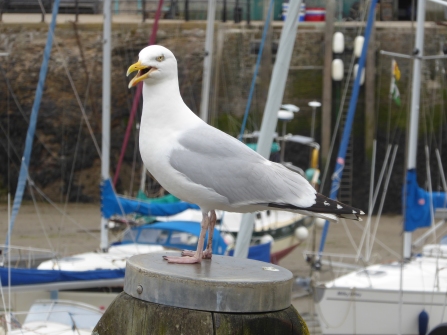 There was, as ever, a seagull eying us up, gauging if we were a source of food or not.

We came across some Morris dancers in this case Border Morris. A friend who plays accordion for Morris Dancers tells me he saw dances in north west India who danced as the Morris does in England.  It is said the blacked faces were a disguise to prevent persecution in witch-hunt days.  I feel it could be a reference to the black faces of the doddymen who lit the navigational beacons long ago; perhaps.  The tattered coats remind me of the watchers wearing long cloaks made of feathers I saw in a vision, or they could be a reference to shamanic coats.

Here they are dancing.  Like an idiot I had my iPhone upright so the video is narrow!

Verity was close by and we went to see her.  It is a striking statue of a beautiful young woman in 20 tonnes of bronze.  From the harbour’s edge we could see layers had been stripped from some parts of her exposing muscles, sinews and her baby; she is pregnant.

Long ago I gave up trying to understand meanings of art; I just enjoy it now.

There was the omnipresent seagull enjoying the warm, bronze foot.

Up popped another Haiku

After a Cornish pasty, we had a ride in a pony and wagonette.  the driver(?) was tall, dark-haired taciturn – though she did tell me how expensive the tyres were and how often they wore out and that she needed the camera to record the idiots she meets as she gives rides – her friend chattered away.  ” It is her pony and wagonette, she is my bestest friend.”

She and I are silent.” Before we left I took this picture and then we walked back up the hill to our car.

The next day we went to The Valley of Rocks where about 50 feral goats live in the cliffs. 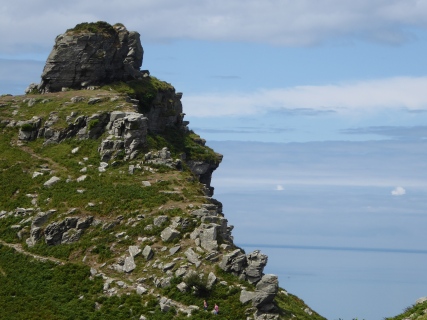 We walked past Castle Rock that had fit, or daft, people dashing up and down but no sign of the goats.  Going round North to follow the path at the cliff’s edge we soon found evidence of goats in the masses of droppings, (sadly I did not photograph this).  A father told his daughter that it was rabbit droppings and I had a sudden image of giant bunnies bouncing around. 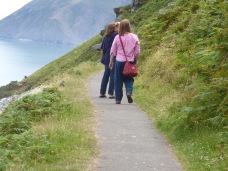 The view from the path was stunning.  Looking up the cliff we spotted the goats

one showing us his noble profile.  I like goats and once had one in our garden and used to take him for walks on the local green.  No one took any notice.

They are intelligent, mischievous and have a sense of fun and yes I like the smell of male goat!

Heavy feet where hooves once danced.

After lunch we went to Lynton and there was a great view of goat-dung trail across the bay. We wanted to visit Lynmouth and took the unusual, possibly unique, cable car down the cliff.  It is driven by the weight of water.  A tank in the upper car is filled with water from a 100 mm pipe as in the photograph to the right.  When the brake is released the weight takes it down.  The water in the lower car has been emptied out.  As one car goes down the other comes up as they are connected by cables.

Here is a video of the ride.  There was a busker playing jazz guitar at the top which gave us a good send-off.

At the bottom in Lynmouth I was impressed by the green of the river bank as it ran under a bridge into the sea. We decided to have a  cream tea and were amused to see a jackdaw joining in the fun. 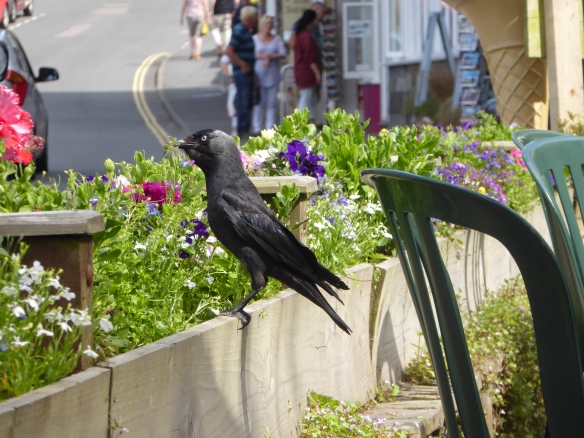 Then it was back up in the cable car and to Watermouth Cove.  Next day we headed off to Bideford to stay overnight with Becky and Tony.

The old bridge in Bideford is fascinating with its may arches of different sizes.  I am told that, as the arches were paid for by merchants long ago, the spans varied depending on how rich the merchant was.  The wider the richer.  The crane was digging berths for the working vessels that moor against the quay.

Here is a video of this most exciting activity.

Looking the other way there is the new bridge and one of the working boats.

We took a bus back to the house as Bideford is built on a very steep hill and we were weary.

The next day we drove back to London in almost record time thank goodness.