This year, Enfield poets were asked to read poems  at the Holocaust Memorial Day  taking place in Enfield and I wrote the Haiku above for this occasion and it was translated into Hebrew by Poet Nurit Kahana.  In the feature image above you can see us in the front row. From the right; Christine Vial, me and Valerie Darville who was sitting next to Gerald Granston who spoke about his experience escaping from Germany on the SS St Louis. 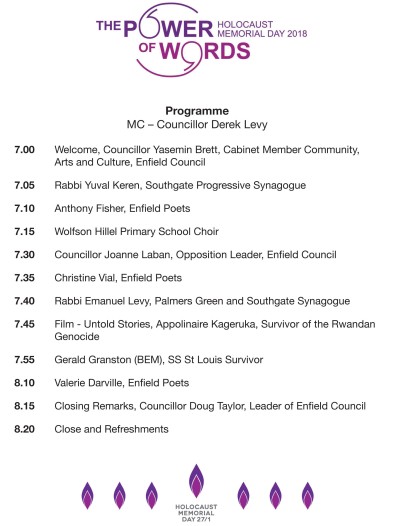 It was an extraordinarily moving event that were very proud to have taken part in. The theatre was full and there was a mix of ages and backgrounds of both  those taking an active part and those in the audience.  As well as the moving account by Gerald Granston of his experiences on the SS St Louis and how he eventually came to England, there was a film of Appolinaire Kageruka  speaking of his harrowing experiences during the Genocide in Rwanda demonstrating that genocide is still happening all these years later.

I was made to think of the awfulness and horror of the Holocaust with friends, neighbours, work colleagues denouncing Jews to the Nazis; how could this happen?  I was born during the war and remember post war newsreels of the death camps but I needed to be reminded of this now. How can we keep the memories alive so that they are still real, visceral, long after any survivors of those dreadful times are no longer with us?  The Memorial Days are designed, in part, to achieve this and I hope they succeed.

There was music from he Wolfson Hillel Primary school choir who sang, in Hebrew, songs full of passion and feeling.

The poems can be seen here.

Images courtesy of the London Borough of Enfield